MEMORY CARE FOR THOSE WITH
ALZHEIMER’S OR OTHER DEMENTIAS

If you’re caring for a loved one living with Alzheimer’s disease or another form of dementia, you know how challenging it can be. You want the best for your loved one – you want them to be safe, well cared for and respected. But as memory loss progresses, your loved one’s needs may be more than you can meet. Often, for those with dementia or Alzheimer’s, memory care assisted living can be a great option – and one that improves residents’ quality of life through thoughtful, wellness-based programming.

Our trained Memory Care team helps residents live a purposeful, whole and successful life. We meet our residents where they are on this journey, delivering the most appropriate levels of support, guidance and care.

NO NEED TO WAIT!
This is the perfect time for Memory Care.

If you’re looking for memory care in McKinney, you must check out the beautiful Memory Care apartments offered at Hidden Springs. This brand-new residence offers studio and two-bedroom private apartments in a secure neighborhood within the community. The apartments are purposefully designed to create open, easy-to-navigate spaces that support independence. Beautifully appointed, the dementia and Alzheimer’s care apartments feature fine finishings, fixtures and flooring to create a home that is as comfortable as it is welcoming. 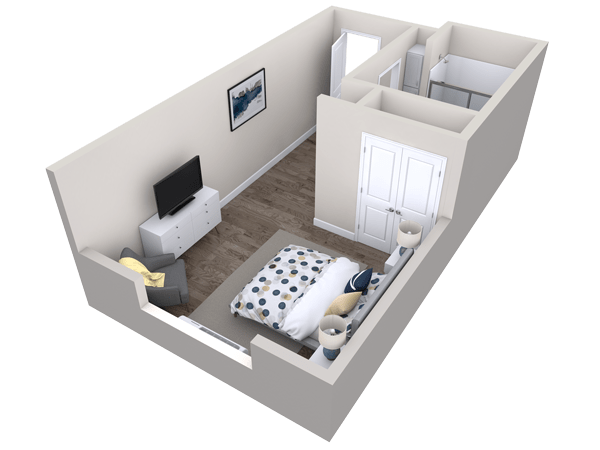 One Fee Covers Everything. Including Peace of Mind.

At Hidden Springs, one convenient, all-inclusive rental fee covers everything your loved one needs and deserves in exceptional Memory Care and everything you need to live with complete peace of mind and confidence. Our monthly fee includes:

Memory Care at Hidden Springs invites residents living with Alzheimer’s disease or dementias to enjoy purposeful, whole and successful lives. This is no “one size fits all” approach to care. Our Montessori Moments in Time™ program is the foundation of the care, lifestyle and understanding we give to each resident.

With our program, we provide residents with personalized support tailored to individual needs, abilities and preferences. The cornerstones of our program are the Five Directional Paths that guide our staff to meet each person where they are, developing unique activities and programs based on favorite hobbies and interests.

What Does It Mean for Our Residents?

For the residents of this McKinney memory care community, it means the individual needs, preferences, choices and fulfillment of each resident are at the center of everything we do. At Hidden Springs, residents come first – above all else. We begin by getting to know each person we have the privilege of caring for, understanding who they really are. With this knowledge of the complicated workings of each individual, we can focus on meeting their specific needs and designing a lifestyle around them. They feel understood, respected and valued. They are encouraged by this life we create and as a result, strengthen our community for all.

Q: Is there a difference between Alzheimer’s disease and dementia?
A: Yes, there is a difference. Dementia is a general term that refers to the loss of cognitive functions and mental decline (thinking, reasoning, the ability to remember) that are severe enough to interfere with a person’s daily life. These symptoms are not a disease but may be present in certain diseases or conditions. Dementia is irreversible when caused by disease or certain injuries. It may be partially or fully reversible when caused by drugs, alcohol, depression or imbalances in certain substances, such as hormones or vitamins.

A specific disease, Alzheimer’s is a progressive, degenerative disease of the brain and is the most common form of dementia. The hallmarks of Alzheimer’s are the loss of function and death of nerve cells in several brain areas. This leads to the loss of recent memories and new learning at first. It eventually affects old memories too.